The most common and affordable way to get around Costa Rica is by bus. Unfortunately, there isn’t a very developed public transportation system or even any public buses. They’re all private buses thus explaining no formal bus stops around the cities. But getting around the country is fairly easy as long as you’re in San Jose. From other cities it seems that the easiest way to many other destinations, especially farther ones, is to return to San Jose and take another bus back. This is one country where I would recommend you rent a car. It’s just easier to get around and you can visit other areas along the way. But if you’re not looking to do that and don’t want to book ridiculously expensive shuttles, this seems to be your only option. Here’s your one stop guide how to get around Costa Rica by bus.

From San Jose to north or west

Although Costa Rica’s transportation is constantly improving, this can get frustrating when you’re short on time and want to see the most of the country efficiently. But there is good news! Terminal 7-10 in San Jose. Being one of the newest upgrades, it’s a very modern and clean bus terminal that is 3 floors high. You can’t miss it, it’s one of the bigger buildings in the area and all the taxi drivers know it. But I still suggest getting an Uber as it’s cheaper and you don’t have to worry about being scammed. If you’ve never used it, use code ‘ubertingtang’ for your first free ride (up to $5, which should cover it in the San Jose area). From Terminal 7-10 you can go to multiple locations west of San Jose and within the Nicoya peninsula including Tamarindo, Samara, Monteverde, Jaco, Montezuma, Santa Teresa as well as some other locations around the country. Getting around Costa Rica by bus has never been easier. This is how you can get to La Fortuna and see the beautiful Volcano Arenal! If you’re planning on going to any of these locations read on!

The building is very new, looks modern, and is easily recognizable with its bright orange paint. If you see the buses parked you’re on the back side and the entrance is on the opposite side with the big orange 7-10 sign. When you enter you’ll be greeted by the numerous taxi drivers asking if you need a taxi. Don’t be scared, they’re just annoying. There is security walking around in tactical vests too. Walk past and you’ll see a waiting area. There are shops and stalls all around the building so if you need any last minute items. 1st Floor – Boarding area and waiting room 2nd Floor – Ticket counter (Boletería), bathrooms, ATM, another waiting area 3rd Floor – Food Court To buy tickets you’ll need to take the escalators up to the second floor. There is also an elevetator (ascensor) if you need it.

To Fortuna use the ticket counter on the very left. The price currently is ₡2580 to Fortuna (about $4-5 USD). Unfortunately it is cash only. There is an ATM and Banco Promerica about 100 feet to the left if you need it. If you continue around there is a bathroom (diagonally opposite the ticket counter). You have to pay ₡200 to use it but they do accept dollars (albeit at a terrible exchange rate). Also on the second floor along with two clothing stores, a coffee stand, some kiosks, and a kids area. To La Fortuna there is no picture posted but the departure times are 6:15am, 8:40am, and 11:50am, Monday to Sunday and is about a 5 hour drive. It does make a stop halfway in a city called Quesada but the seats are cramped, so make sure to download some Netflix for the way. Once you have your ticket make sure to check the screens around the terminal for your bus departure. On the third floor there is a mini food court. Not much selection but it is quiet if you’re looking to retreat or have some time and want to escape the busier waiting rooms downstairs.

Fortunately, there is free WiFi in the building! It’s -WiFi Terminal GRATIS and -WiFi Terminal GRATIS 2. You just have to register with your email or social media and you’ll be off. When it’s time to board just go back downstairs, past the waiting room and you’ll find the boarding area. Either check the screens for where your bus is or just ask one of the staff there, everyone is helpful. If you really need to use the bathroom before taking your bus journey there is a bathroom the opposite corridor, same cost as above. Make sure to be by the boarding area before your scheduled departure. They are very punctual and will leave on time. I’d suggest 15-20 minutes early and just keep an ear if you hear your destination being called beforehand.

Bus Schedules out of Terminal 7-10

It sometimes is very hard to find the bus schedules for anywhere in Costa Rica. There is a website for a limited number of destinations (unfortunately not Fortuna) out of San Jose and you can buy your tickets directly online. It is a great service but they do charge you an extra $3 convenience fee. 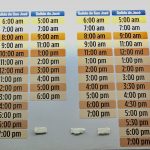 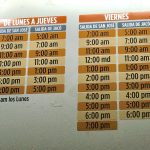 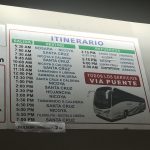 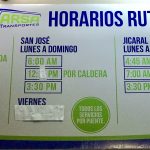 These cover a multitude of cities but the main directions are to Jaco; via Jicaral; and services via Puente. Picture 1 is the daily weekday buses to and from San Jose and Jaco. Picture 2 is the weekend schedule for Jaco. Cities covered in picture 3 are Pueblo Viejo, Quebrada Honda, Barra Honda, Loma Bonita, Nandayure, Jicaral, and Becujo. Pic 4 is for Nosara, Nicoya, Santa Cruz, Tamarindo, Liberia, Samara, Caldera, and Hojancha all via Puente.

There is also no picture posted for Montezuma, Mal País, or Santa Teresa. It’s quite a ride from San Jose as the shortest trip requires you to take a bus, hop on the ferry, and take another bus once you’re on the peninsula. These services are provided by Transportes Cóbano twice a day at 6am and 2pm. The ride takes about 5.5 hours total. Buy your ticket either at the ticket counter or online at http://laterminalcostarica.com. The cost is ₡7545 (roughly $14). However, if you do buy the ticket online you will be charged an extra $3 USD as a “convenience” fee. Catch the bus at Terminal 7-10, load your bags, and they stay on the bus until your destination (even though you have to walk onto the ferry the bus is able to drive on and will keep your bags locked underneath. The ferry ride is nice at least so I would suggest taking the morning bus and enjoying the view. They also have a decent little snack bar inside. If you’re going to Montezuma you’ll have to change at Cóbano for an extra bus as the original one goes straight to Mal País and Santa Teresa. Luckily it’s a short one but good to be aware. You can do this whole route even a bit cheaper by not taking an organized bus but you’ll have to take your bags off each bus and try to make the connections to the other buses and ferry yourself and it’s only $3 cheaper. For the added convenience I think it’s a decent service As always, keep an eye on your stuff at all times and don’t store anything overhead. I never felt unsafe on a bus but have heard numerous stories of stuff being taken from the overhead bins without people knowing. I’ll be updating this page in the next couple of days as I add more information on how to catch other buses around this beautiful country as well as things to do in each location.

Booking.com
We use cookies to ensure you receive the best experience on this site. By continuing to use this site, you are agreeing to our privacy policy.