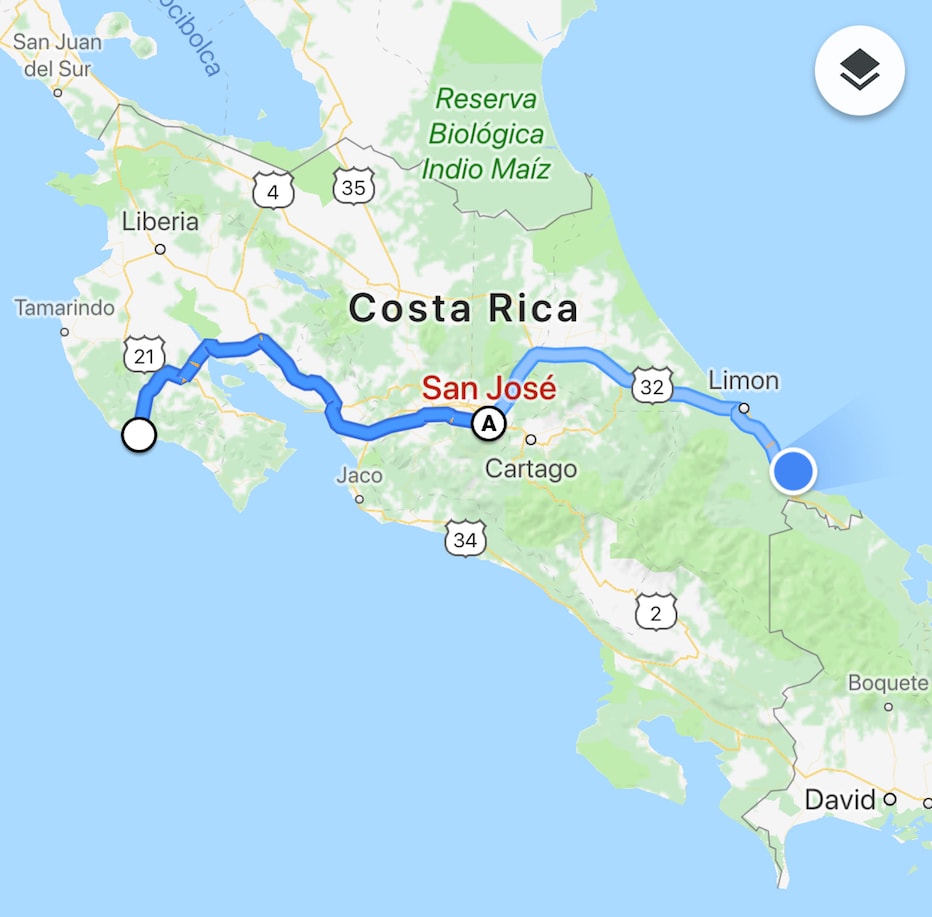 Definitely possible to travel from the Pacific to the Caribbean by bus in one day!

The Caribbean is known for its easy going culture. People are nicer, many consider the food better, and is just regarded as more laid-back than the rest of Costa Rica. You’ll notice that people smile more. There are great beaches and hiking available. Plus you’ll see a lot of the areas where most of Costa Rica’s bananas are grown. Use these maps as locations to find out where you’ll get dropped off, how to get to your accommodation from there, as well as where you’ll have to go to get a bus to your next destination.

How to get there from San Jose

If you are planning on traveling to the Southern Caribbean by bus you can easily access most of it from San Jose. You’ll be leaving out of the Mepe Bus Terminal in San Jose.

It’s only a block away from the newer Terminal 7-10 so if your Uber dropped you off there it’s only a 5 minute walk. Even though it is fairly close this is not the safest area of town thus always be aware and don’t travel alone in the dark. This terminal is a lot older and not as nice but it’ll take you to the east coast. The major destinations are Cahuita, Puerto Viejo, and Sixola (the smaller border crossing into Panama). Another major stop is Limón, which isn’t so safe and not recommended as a destination, but can be used as one way to get to Tortuguero. For more information on how to get to Tortuguero, refer to the bottom of this post.

I won’t be listing bus schedules this time as you can find the up-to-date schedule for each destination on their website.

There is no bus terminal in Puerto Viejo. It is just a stop on the road across from the beach. But there is a ticket office there where you can prebook your tickets and see the schedule.

Tortuguero is an amazing place to visit to be able to see many different sea turtles in Costa Rica.

Instead of using the Mepe buses and going to Limon, you can take a bus from San Jose to the docks at La Pavona. Either way is going to be a long day and you should plan on being at the docks (either at Moin or La Pavona) early in the morning. However, La Pavona is usually regarded as the more popular route for independent travelers as well as locals.

The bus terminal to La Pavona from San Jose is the Gran Caribe Terminal in downtown San Jose. You can get more information on their website. You will have to take the bus from San Jose to Cariari then transfer to La Pavona (about ₡2000 / $4).

Bus schedule Cariari to La Pavona: 6AM, 9AM,11:30AM, 3PM. Then from La Pavona you can take the boat to Tortuguero which costs ₡2000. Buy your ticket from the restaurant Rancho La Suerte. The boat takes about 1 hour and the boat schedule is 7:30AM, 11AM, 1PM, 4:30PM. The boats also wait for the arriving buses.

Thus, the suggested schedule is to take the 9am San Jose bus and arrive at Cariari at 11am. Then take the 11:30 bus to La Pavona. (The bus to La Pavona usually waits for the bus arriving from San Jose). Do not take any bus later than the 9am bus as you won’t make it to Tortuguero the same day.

I hope this helps you in planning your trip. If you have recently traveled this route and want to add anything or find any discrepancies be sure to share them below!

6 years ago I was in Paris celebrating the 850 yea

Prague has got lots to discover. An easily walkabl

I've been waking up to this view of Žižkov Tower

Breakfast at my favorite place. When in Rincon be

The hidden beaches of #Mexico 🇲🇽

With a Swiss friend now and going over travel stor

Booking.com
wpDiscuz
0
0
Would love your thoughts, please comment.x
()
x
| Reply
We use cookies to ensure you receive the best experience on this site. By continuing to use this site, you are agreeing to our privacy policy.