Getting around Costa Rica can be hard. But with a little patience and research you can get around the country for dirt cheap. If you want to see Arenal Volcano (Volcan Arenal) you’ll have to get to La Fortuna. The good news is you can get to La Fortuna by bus. The bad news is: Traveling here by bus is quite a bit away. If you’re not trying to backpedal, the transportation to places other than San Jose is abysmal. If you are trying to do Costa Rica on a budget, this is one place I would suggest renting a car. For one thing, prices aren’t that much more, especially if you split the costs with someone else, as there are many places in between that are worthy of stopping off. Or consider hitchhiking. It is common in this country and if you keep your wits and know a decent amount of Spanish you shouldn’t have a problem. If you want my honest opinion on this city as well as things to do, read my page on La Fortuna on a budget.

Getting around La Fortuna by bus

If you are still considering taking the bus, or had your drivers license recently expire (like I did, sigh) then there is a direct bus from San Jose’s Terminal 7-10 three times a day. The cost is ₡2580 (about $4.50) for one way. You’ll arrive at La Fortuna bus station which is located right in the center of town. Most accommodation isn’t too far as well as numerous restaurants and shops.

The bus station fortunately is located right in the middle of town.

From Liberia by bus

This is a bit more complicated then coming from San Jose as it involves three buses to get to La Fortuna. First, take the bus to Canas from Liberia. Then take the one to Tilarán then your final one to La Fortuna. The bus schedule from Liberia is posted on their website at Reina del Campo. From Canas to Tilarán buses are very frequent and run about every half an hour. From Tilarán there are three buses to Fortuna, 7am, 12:15pm, and 3:30pm (current as of August 2018). Thus, the suggested schedule is take the 9 or 10am bus from Liberia to Canas, take the first bus to Tilarán and make the 12:15pm bus to Fortuna. 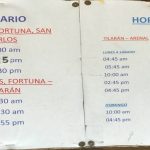 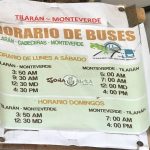 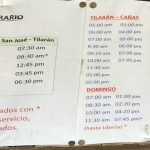 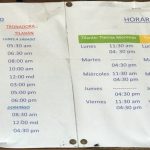 Probably the most inefficient way to get to La Fortuna even though the distance is relatively short. There are no direct buses thus you’re stuck with spending a ridiculously long day on two buses. To get to La Fortuna by bus from Monteverde, take the bus to Tilarán at 7am. This bus journey takes about 2 and a half hours and should cost about ₡1000. Then you’ll have to wait for the next bus to La Fortuna/San Carlos at 12:15pm. This will take another 2.5 hours and cost ₡2680. Total cost:  ₡3680 To Monteverde: Take the 8am bus (labeled 7:30am on the schedule) to Tilarán and the 12:30 bus to Monteverde. If you’re really lucky you might be able to make the 9:30am bus but don’t count on it. Total cost for public buses: ₡3680 (about $6.50). Because of the ridiculously long time it takes to get such a short distance I suggest taking the “jeep-boat-jeep” ride which you can find for $20 (you’ll see flyers in town for Red Lava Tours for $20). It picks you up from your hostel/hotel and drops you off at your destination in town. It’s the only time in Costa Rica where I really recommend taking a shuttle. Plus it’s supposed to be a very scenic ride on clear days. Otherwise, it is 7-9 hours to/from Monteverde by bus! 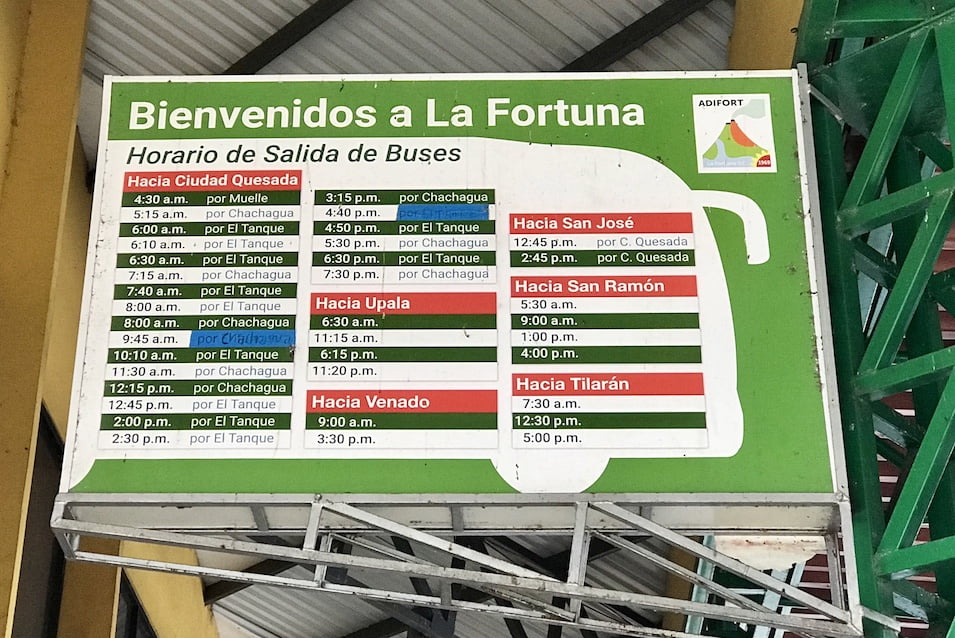 The buses from La Fortuna either go back to San Jose or to Ciudad Quesada, Upala, Venado, San Ramon, and Tilarán.

We wanted to get away from the rain and went straight to the Pacific coast where we were able to enjoy the warm sun and beaches in Tamarindo. To get to Tamarindo from La Fortuna it is a bit of a journey, involving 4 [not so fun] bus trips. Take the 7:30am bus to Tilarán (₡2680), then the 11:30 bus to Canas (₡600), once there, there are numerous to Liberia (₡1550). From Liberia take your final bus to Tamarindo at 1pm (₡1450). Total for the 4 buses: about $11 USD.

The bus stop in La Fortuna is located right next to a MegaSuper grocery store if you need to get anything after that long bus ride or grab something when you’re leaving. If you have a bit longer, the Soda La Hormiga next door has really good local food for cheap! If you’re looking for a place to stay here are some top places on Booking.com If you’re looking for things to do in La Fortuna on a budget, read my page on La Fortuna on a budget.   These are the absolute cheapest and shortest ways to get around that I’ve found (not including hitchhiking or getting a ride). As you can see it’s not really the most direct routes and their public transport isn’t ideal. Buses don’t have air conditioning around this part of the country and some don’t even have storage underneath for your bag, meaning you have to carry it up and store it inside, sometimes in a crowded bus. For this reason, if you can avoid the buses around Fortuna I’d suggest it as Costa Rica has been where I encountered some of the worst buses in the world. Otherwise, I hope this helps and enjoy the same journey that I did! -Mike TingTang 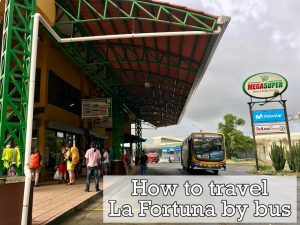 Booking.com
We use cookies to ensure you receive the best experience on this site. By continuing to use this site, you are agreeing to our privacy policy.