La Fortuna, Costa Rica. A small town north of San Jose that is known for being the destination hub for Arenal Volcano (Volcan Arenal). It got its name for being fortunate enough to have been spared from the eruptions of the volcano. Now, you can consider it the tourism hub for everything to do around the volcano. If you want my honest recommendation about visiting this town and Arenal Volcano on a budget: don’t bother. Especially not during rainy season. It doesn’t mean there isn’t anything to do, just that there’s just not enough value for the effort. I think your time is better spent in other areas of this country. Read on to find out why. If you are wondering if you can get here for cheap and how, visit La Fortuna by bus

Things to do in Fortuna

There are plenty of zip-line companies to be found here. Rumor has it that Costa Rica was the birthplace of the zip-line, and that it’s actually from Fortuna. I don’t have any sources to back that up but with all the greenery around and huge trees it’s not too hard to imagine.

Chances are you’re here for the volcano. Being one of Costa Rica’s five active volcanos, Arenal Volcano is famous because it used to be Costa Rica’s most active volcano. In the past, stunning lava could regularly be seen glowing above, but it has been dormant since 2010. Now it looks just like an ordinary sleepy volcano. If you are planning on visiting it, Fortuna is the perfect place to stay as it’s not too far and there is plenty to see and do. You can get an excellent view of the volcano (on clear days) and some might argue that it’s a better view from La Fortuna than it is closer to the volcano, with numerous stunning backdrops. If you’re planning on visiting Arenal Volcano, most people stay in La Fortuna. You can stay in Arenal but accommodation is more expensive, plus there’s a lot more going on in La Fortuna, plenty of restaurants, and nightclubs. To get to the National Park it’s not that far thus I’d rather stay in La Fortuna. To get there take the bus to Tilarán which passes by the Arenal Volcano National Park. Make sure you tell the driver that is where you want to go so you don’t pay the whole fare. This is also where you change buses to Monteverde if you want to go that way. Booking.com Once you get there you’ll have to walk to the parking lot and the entrance fee to the national park is $15. While you cannot hike up the volcano itself, there are three tracks around the base that you can chose. Do not try to hike to the crater, despite what outside tour guides might tell you. Here is a recent article about authorities investigating these so called “tour guides” that are putting travelers lives in danger. When we were there, we couldn’t even see it. Half of the volcano is covered in clouds thus we couldn’t even see anything. Granted we did visit during the rainy season but even most of the pictures I’ve seen from fellow travelers don’t seem enticing at all, not like the ones you find on the internet. If you have the opportunity, I’d say jump over to Guatemala where you’ll see stunning views of the Volcán de Fuego, especially given its recent eruption.

We instead decided to skip the volcano last minute because of the cloudy view and opted instead for the free hot springs, nicknamed Tabaconcito. There is a thermal river that flows right by the national park that is heated by the super hot magma underneath. Look for Tabacón Thermal Resort & Spa which is a super fancy place that you can pay to enjoy the thermal baths then just walk 100 meters downhill and visit the river flowing underneath the bridge for free. This water is steaming at a very comfortable bath-like temperature. I heard a lot that you have to enter through a fence in the road but I just walked down a taped off driveway and found the steaming river. 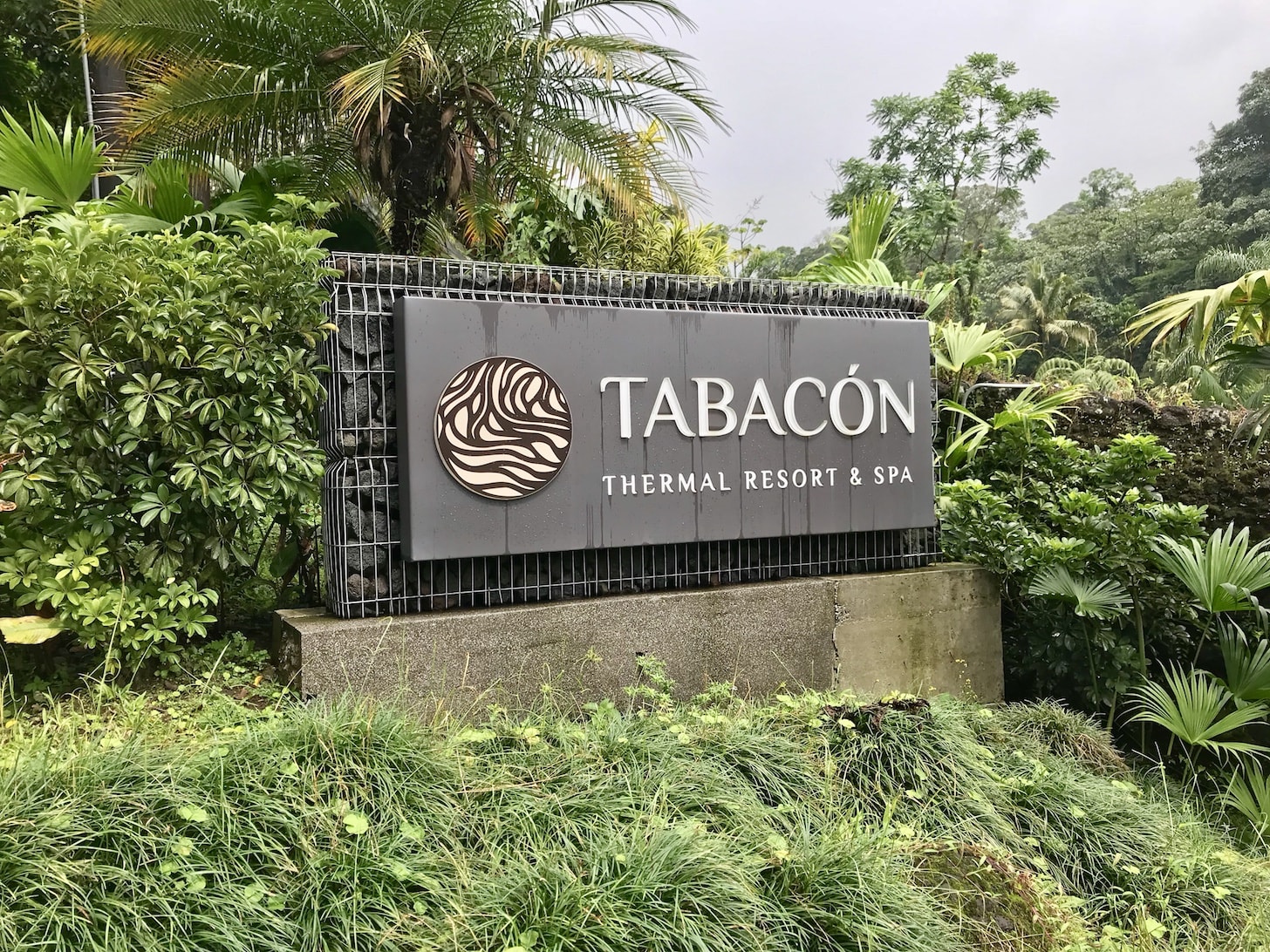 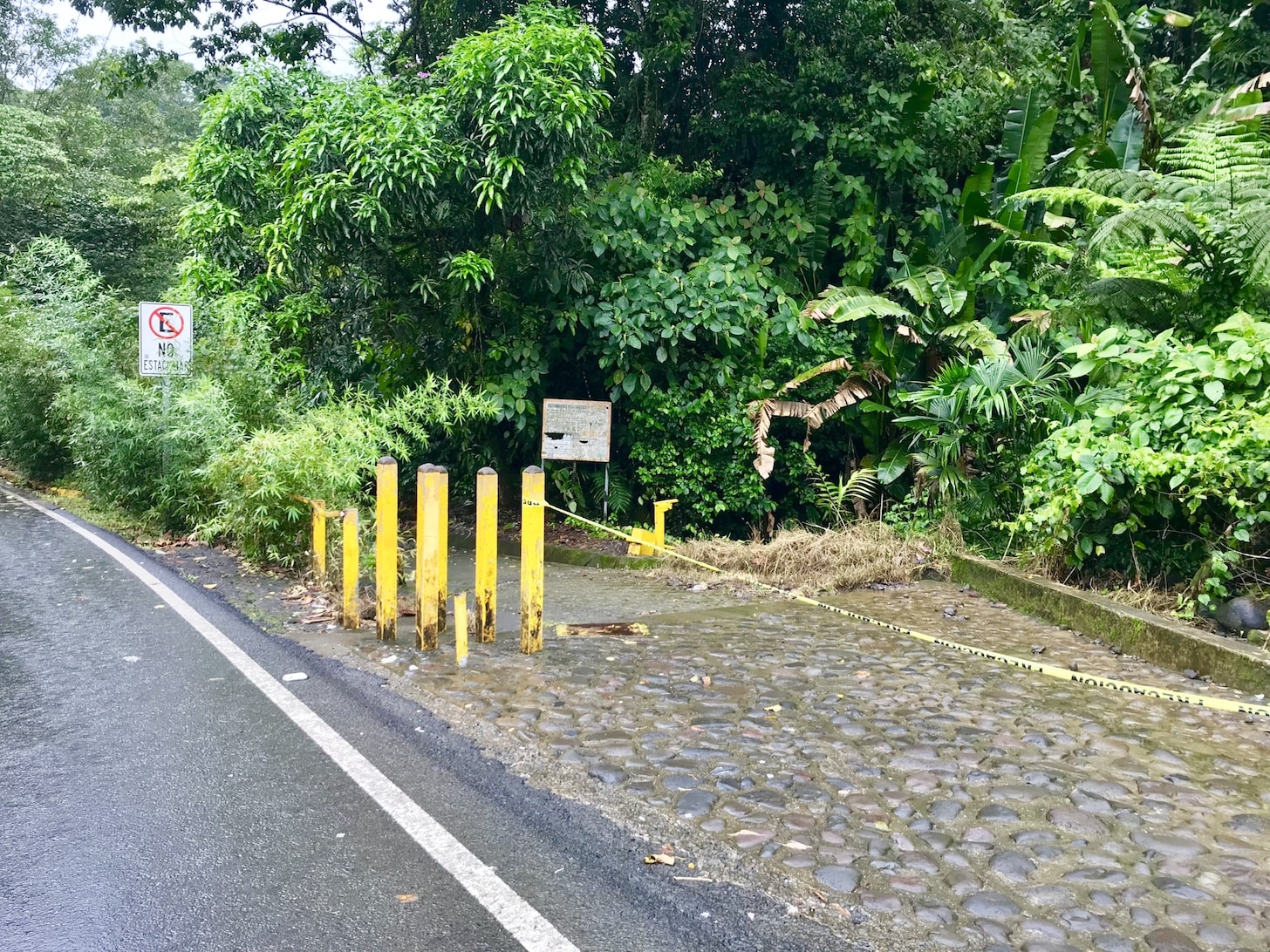 Then follow the path until the end where it splits into two. 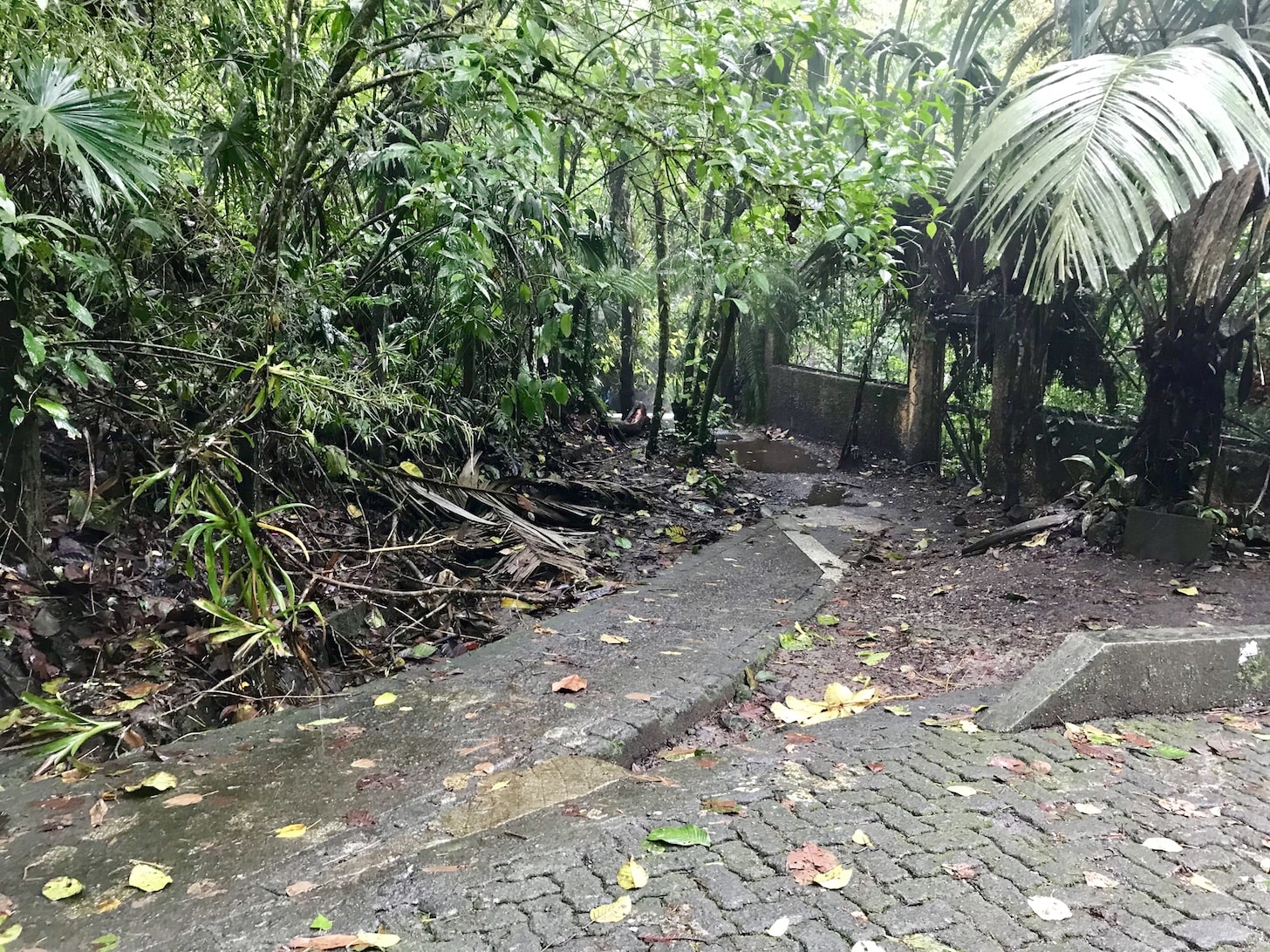 Go a bit further down the sidewalk sized path and you’ll find the steaming river. You’ll have two options; first, you can go left under the bridge. This is where it looks like it opens up more and most people go. Just continue under the graffiti covered bridge to other side, climb up and you’ll find a number of places to lay. Or, you can go right, which is what we did, and just go down the concrete waterfall where it seems a bit more private and not many people visit. 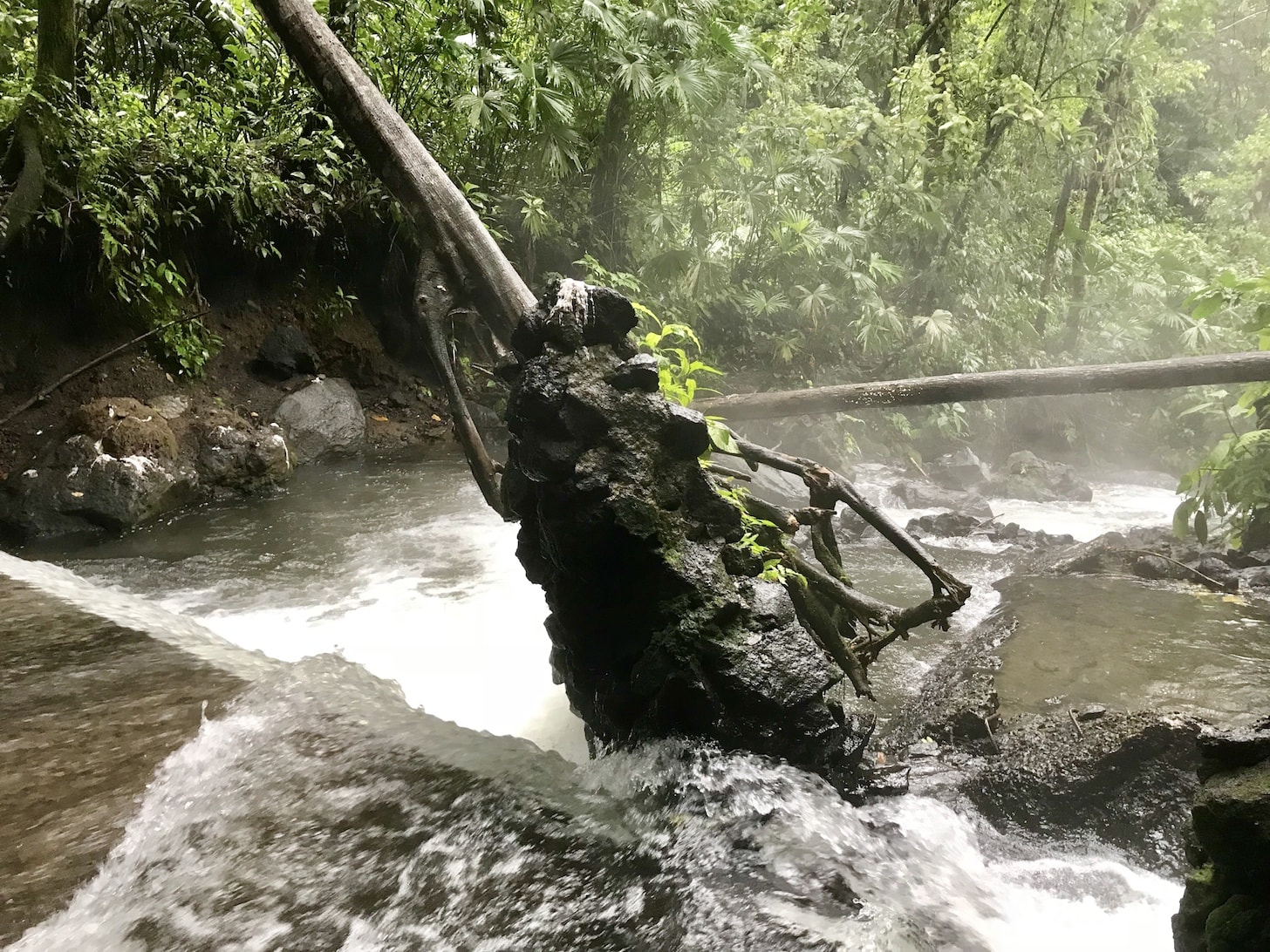 To get here by bus just go to the La Fortuna bus station and take one of the three buses to Tilarán (listed above). Make sure to tell the driver you want to get off at Tabacón so you don’t pay the whole fare. We suggest taking the 8am bus so you have time to enjoy the whole day. Plus there weren’t many people there, just one other couple for most of the day, so it felt like we had it all to ourselves. 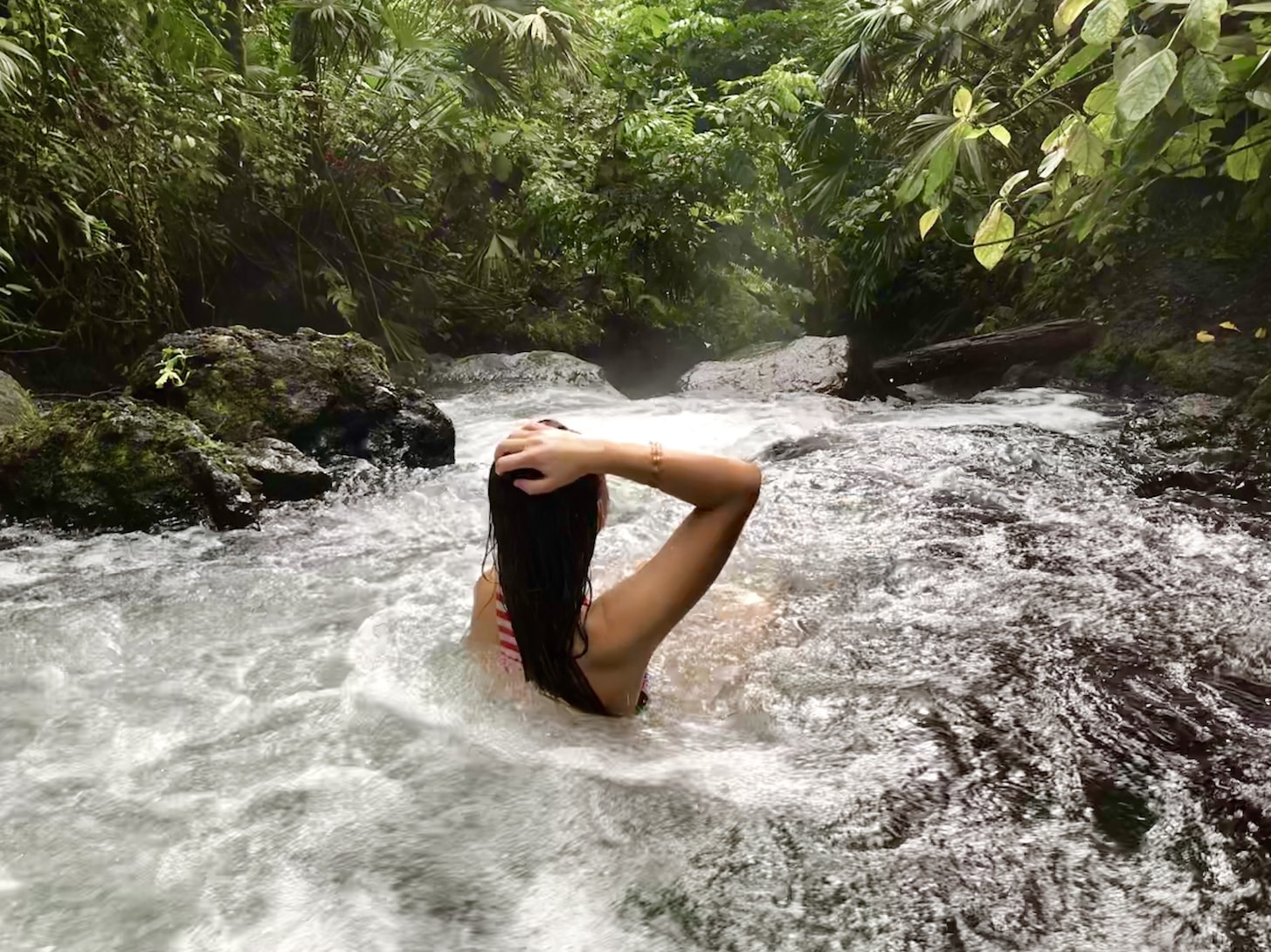 If the day does clear up you aren’t too far from Arenal thus you can also do the volcano the same day. Otherwise the bus back to Fortuna is at 2pm. We decided to skip it and just hitchhiked with a very nice couple.

Also known as Catarata Fortuna, La Fortuna de San Carlos, and Fortuna River Waterfall. On the way back to Fortuna from the volcano/hot springs you can make a stop and go to La Fortuna Waterfall. It claims to be the most visited waterfall in the country, with a 200ft (70meters)drop. These, however, are chilly waters, unlike the thermal hot springs. But you can hike down and swim in the waters below. Get there early as I hear it fills up with people quickly. The entrance fee is $15 USD. There is a lot of wildlife that can be seen in the area too. To get here by bus is a bit more difficult thus I would suggest seeing if someone else is going that way, splitting a taxi, or hitchhiking.

Cerro Chato is the other volcano part of the national park here. Chato Volcano however is completely dormant. One of the lava flows is what created La Fortuna Waterfall thus I’d suggest doing both the same day. Cerro Chato is also the closest to La Fortuna, only about 6km away, as opposed to 20km for the official park entrance. You still have to pay the $15, but to a land owner instead of the national park service. It is possible to hike up the volcano, but it’s considered a difficult and steep 2.5 km hike.  You can start by the waterfall then descend towards The Arenal Observatory Lodge. I have no experience with this and wouldn’t advise of it during the rainy season. Even during the dry season it is recommended to do the hike with a guide.

Not too far on the map but definitely not a day trip. Even driving it’s a bit far as you have to go around Lake Arenal. Many people stay here overnight and enjoy the rainforest and surroundings. You can take the public buses via Tilarán but there is also a “Jeep-Boat-Jeep” option which should accurately be named shuttle-boat-shuttle, available for $25. If you book it directly with Red Lava Tours in town you can get it for $20/person which is what I would recommend. It only takes 3 hours as opposed to the 7-8 via bus and they pick you up from your hotel and drop you off at your destination, bags included. For more information on how to get to Monteverde by bus click here.

The bus stop in La Fortuna is located right next to a MegaSuper grocery store if you need to get anything or grab something when you’re leaving. The town is very touristy with a number of restaurants and hotels catering to tourists. But right next door to the grocery store is the amazing Soda La Hormiga which has really delicious local casados which are the cheapest eats in town (the one pictured is ₡2500/$4.50). Their Tico tacos also looked amazing. While we’re talking about delicious and cheap eats, if you’re looking to get away from the casados, there is another amazing soda in town that serves delicious tacos at Pollos La Familia (can you notice I was craving tacos). Otherwise, there is no shortage of great restaurants in town but they do cater to tourists thus expect prices to be a lot higher.

Things to pack for Fortuna

There are a number of hotels, hostels, and other properties in La Fortuna, Costa Rica to stay in. Quite a few affordable hostels to hotels for every price point. Some even include decent breakfasts.

The water is safe to drink. Check with your hotel/hostel first but the water in Fortuna is potable. You can also pick up water at any store but the MegaSuper has it the cheapest. There is no Uber. Taxis are readily available but expensive. La Fortuna is walkable and there are bike rental shops, otherwise buses, shuttles, or good ol’ hitchhiking. Climate: Between 25-30° Celsius. Dry season: December to April. Rainy season: May to November (but better deals).

Here is a map of the places I mentioned in this post to go see and eat. You can click the star and add it to your own google maps to make things easier. Booking.com 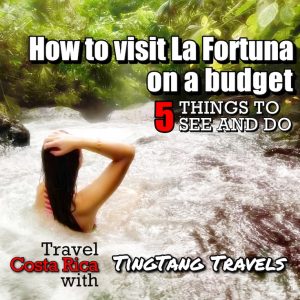 6 years ago I was in Paris celebrating the 850 yea

Prague has got lots to discover. An easily walkabl

I've been waking up to this view of Žižkov Tower

Breakfast at my favorite place. When in Rincon be

The hidden beaches of #Mexico 🇲🇽

With a Swiss friend now and going over travel stor