Ever heard of round pyramids?  If you haven’t, don’t fret, to be completely honest I never had. I’m sure you know that Mexico has an abundance of Aztec and Mayan pyramids but did you know the Guachimontones in Mexico are the only known round pyramids (or more accurately, circular stepped pyramids) in the world! Located just under two hours west of the center of Guadalajara, these Guachimontones are a prehispanic archeological site located just outside the town of Teuchitlán. 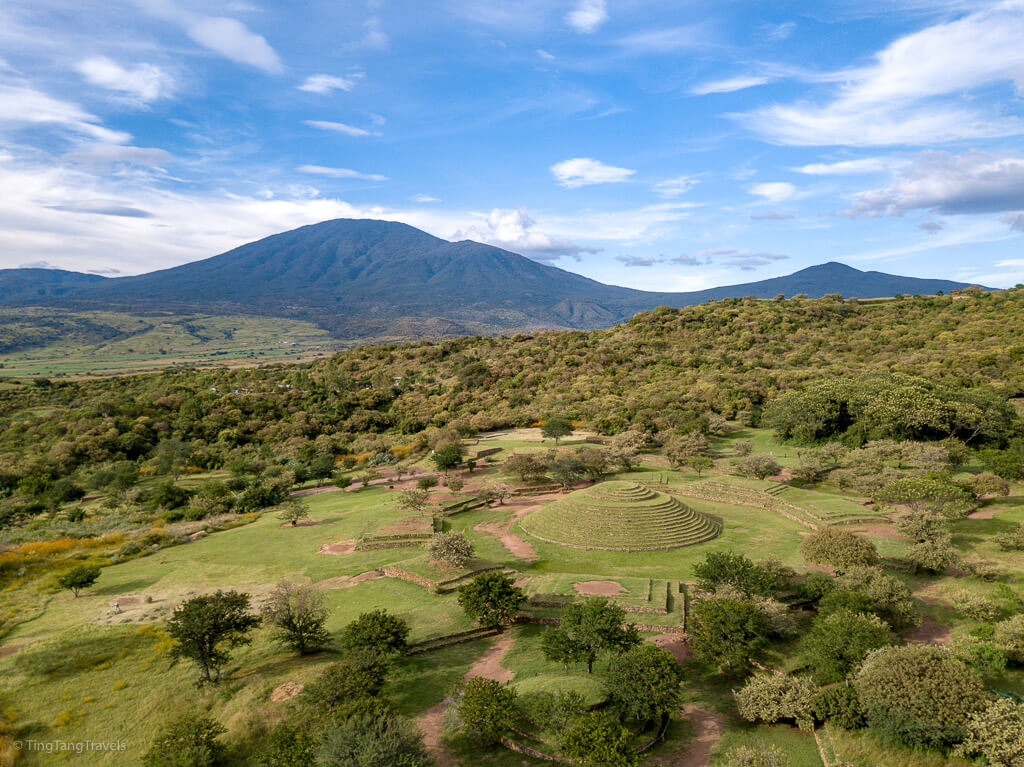 Instead of a usual square base like most pyramids, these have round stepped bases, built more than 2,350 years ago with prehispanic significance. They aren’t particularly big, but they are cool to see. 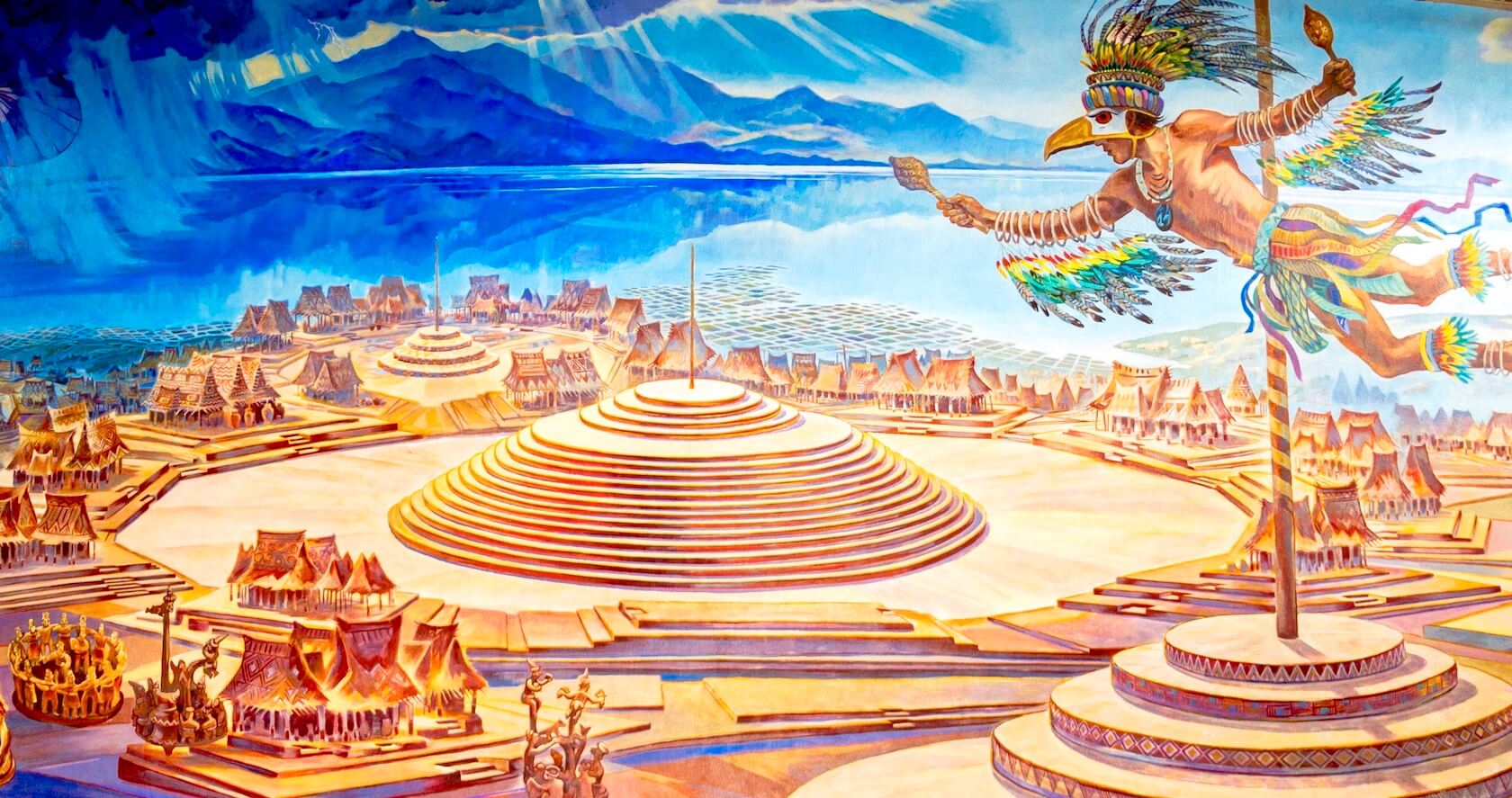 The largest pyramid is known as “Circle 1” or “Gran Guachi” but looks just like a hill as it has been looted and not as explored.

“Circle 2” or “La Iguana” is the second largest pyramid, the one everyone comes to photograph. It only has 13 steps until it reaches the upper level and then another 4 up top that is believed to be an alter used for ceremonies. It was constructed by a society known as “Teuchitlan tradition” which existed around roughly 300-900BC. 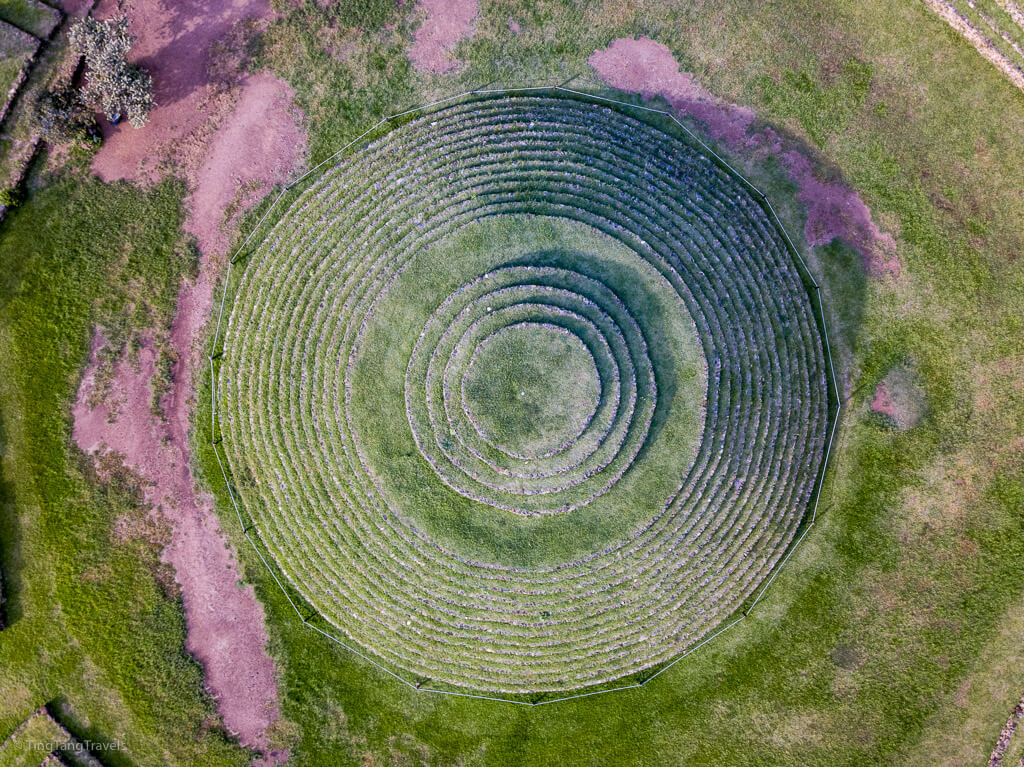 There is a post hole on top that would have been used during rituals where someone would dance, “or fly”, as illustrated in the mural above.  It is a UNESCO World Heritage site and definitely worth a day trip from Guadalajara. What’s amazing is how perfectly round they are.

How to get there

The quickest way to get there is by car. Located right off the highway, it is a straight ride from Guadalajara. Just type in Guachimontones and you will drive through the town of Teuchitlán. 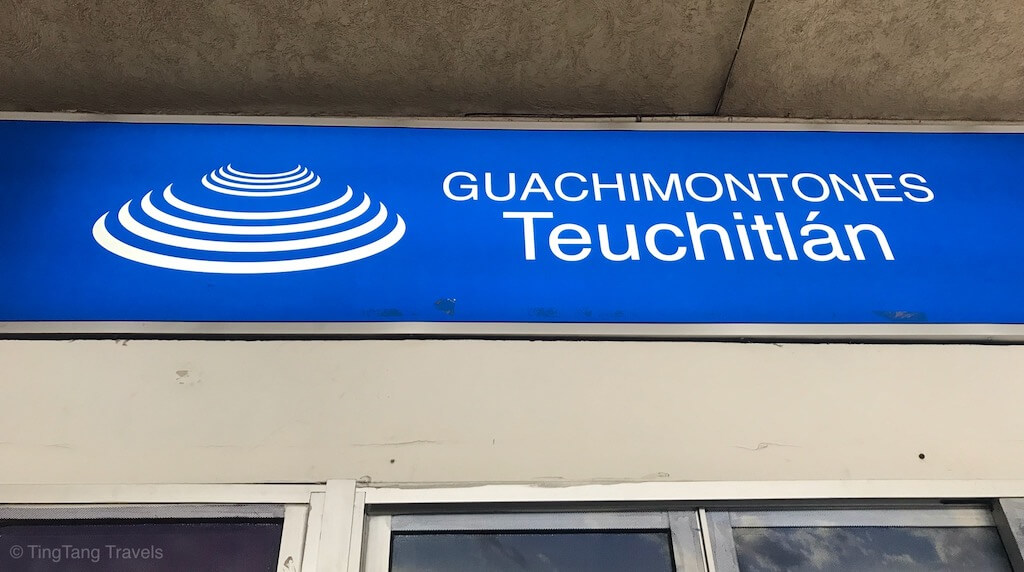 If you’re trying to get there on a budget, you’re in luck. There is a bus that goes directly from Guadalajara and will take you to Teuchitlan. It leaves from Guadalajara’s old bus station, Antigua Central Camionera, located at Los Angeles 218. It costs $170MXN for a round-trip ticket as of October 2018 (about $8-9 USD). If you’re on the western side of Guadalajara it also makes a stop in Zapopan at Central de Autobuses de Zapopan on Avenida Aviacion and Avenida Vallarta by the 7-11. 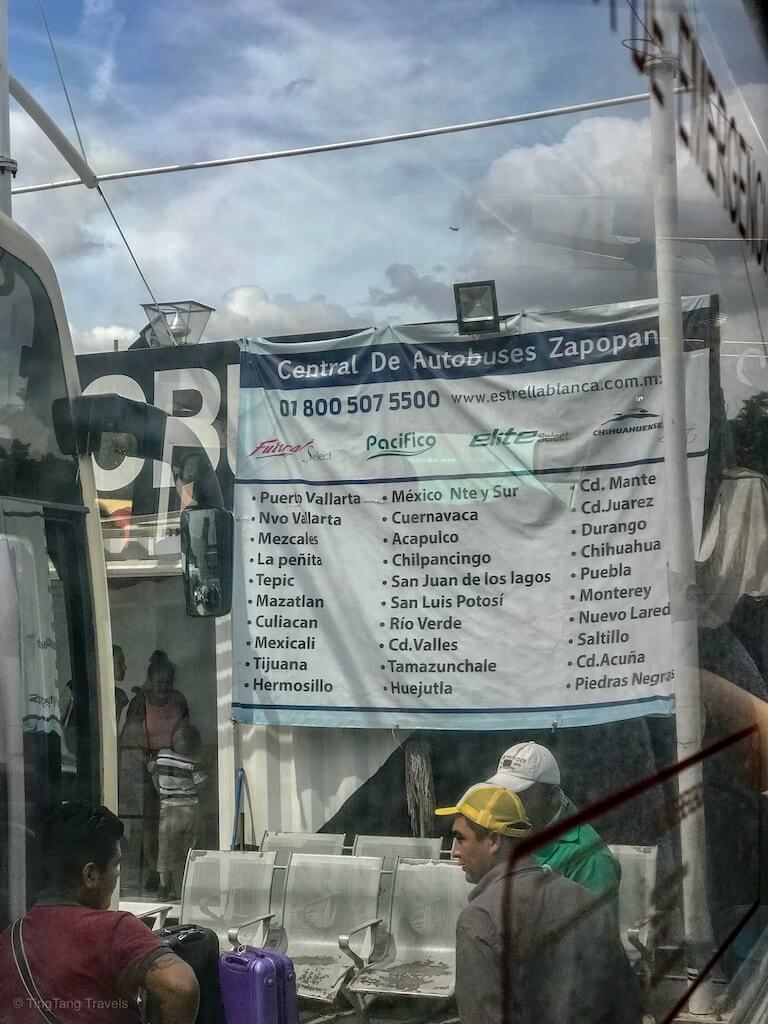 Once you arrive at Teuchitlán you’ll be welcomed by this sign and the pretty mountains, then it’s only a 15 minute hike up to the entrance. 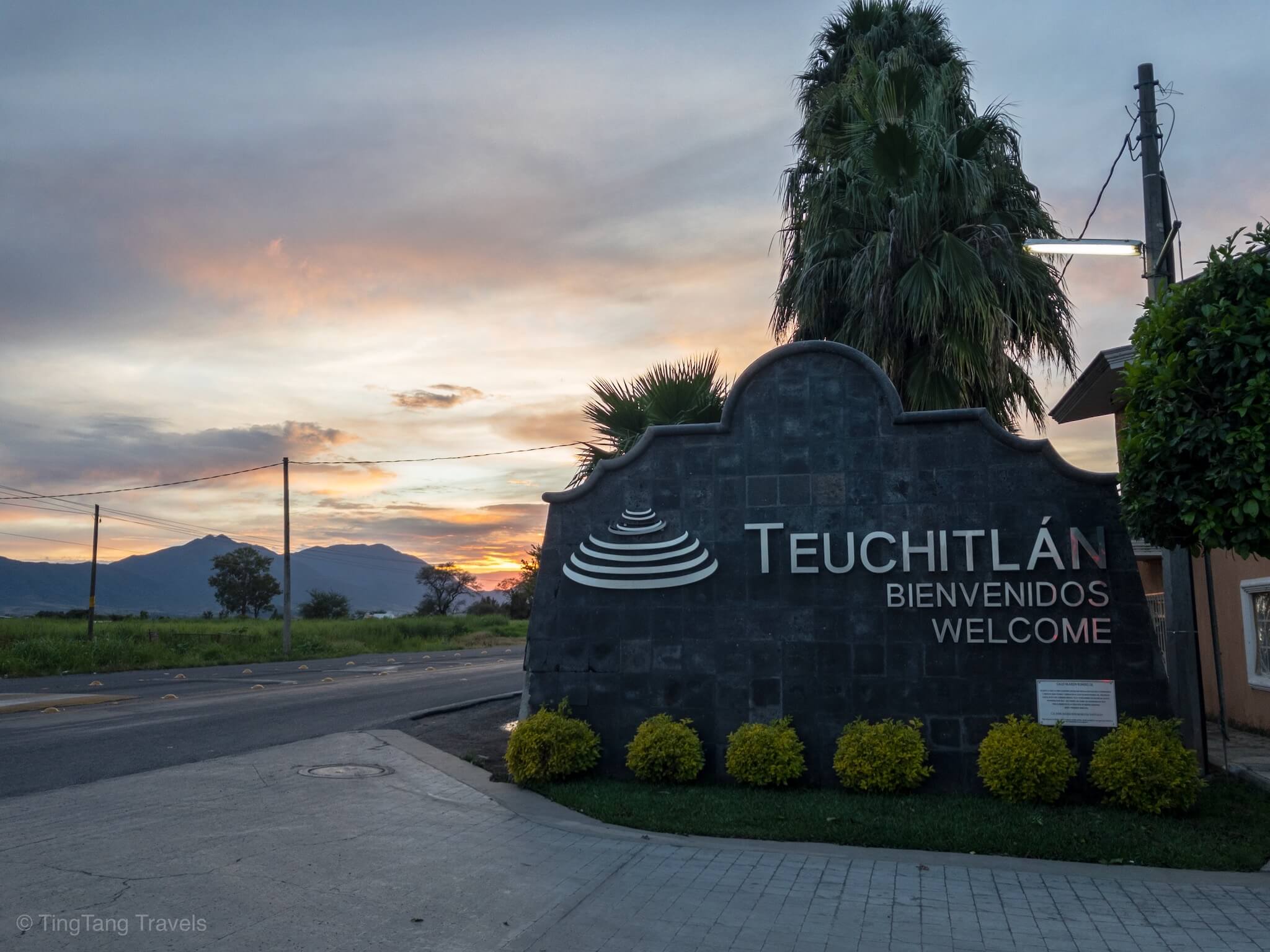 It is a bit steep so if you’re unfit just take a taxi, however it’s not a far walk. Do bring water and sunscreen! 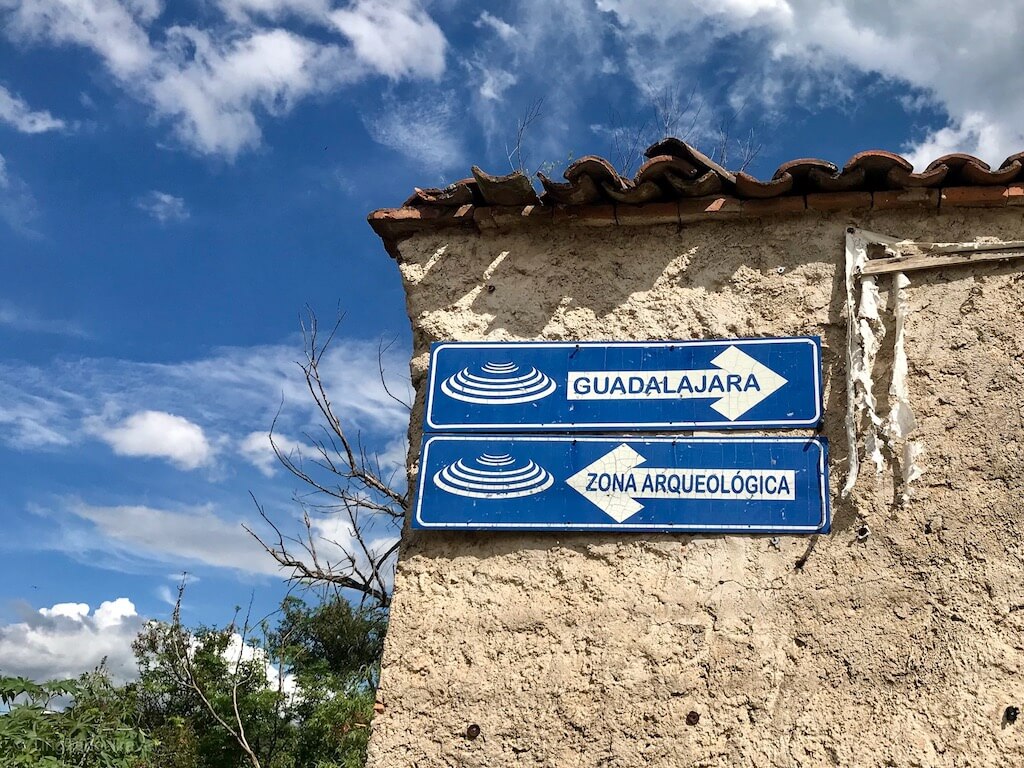 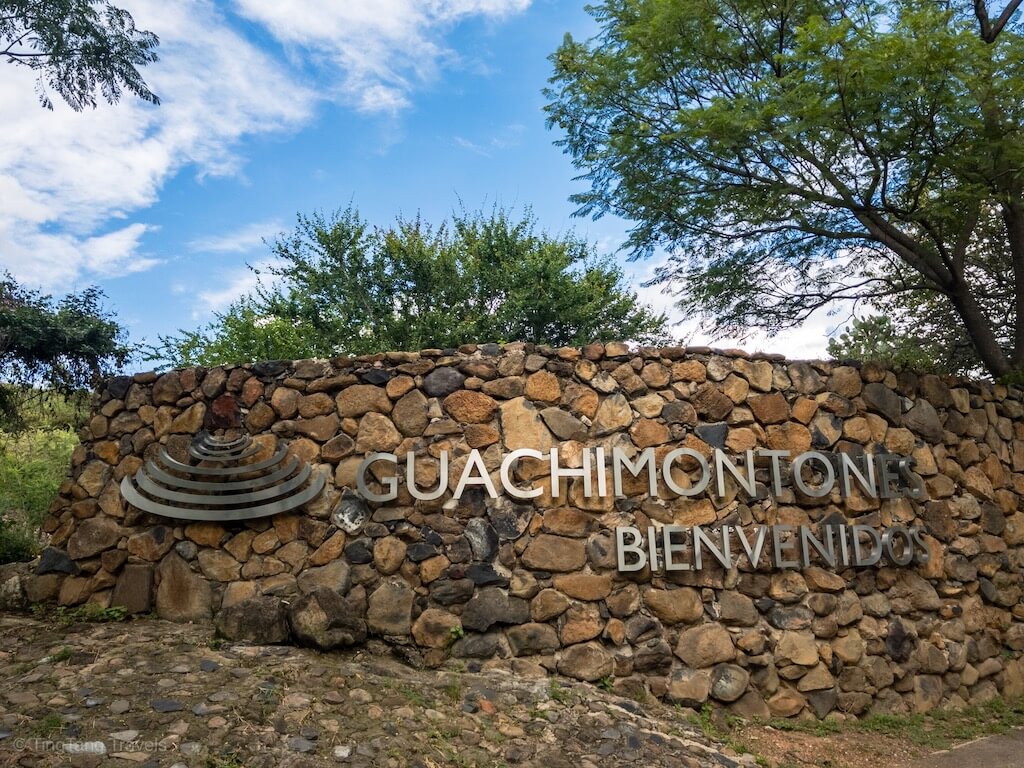 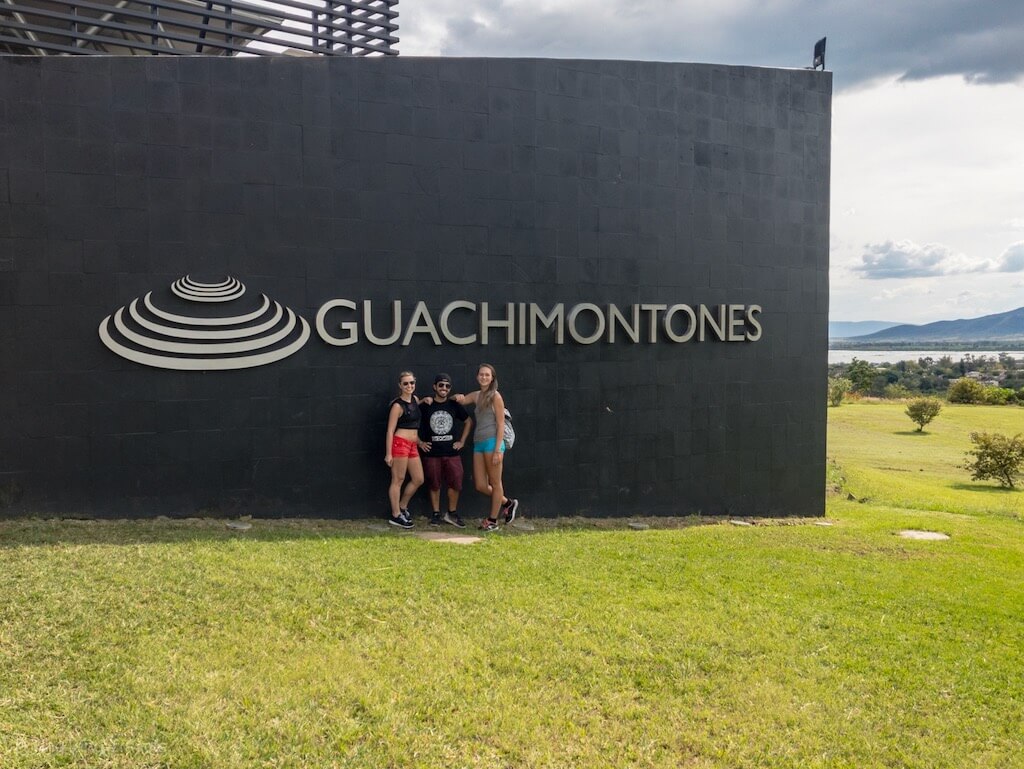 Great photo-ops in front of the interpretive center

The entrance fee to the site and the interpretive center is only $30MXN, ($15MXN for students, free for children under 12yr). Entrance to the site used to be free but is now all one ticket, which is a small price to pay to maintain this archeological site. The interpretive center is simple but modern and provides good history and insight into what Guachimontones used to look like and what they were used for.

Opening hours are Tuesday – Sunday, from 9am to 5pm. (You can wander around the site until 6pm though.)

From there it is another, somewhat steep, walk up to the pyramids. Do bring water as it’s all in the sun and the closest water sold is back in Teuchitlán. 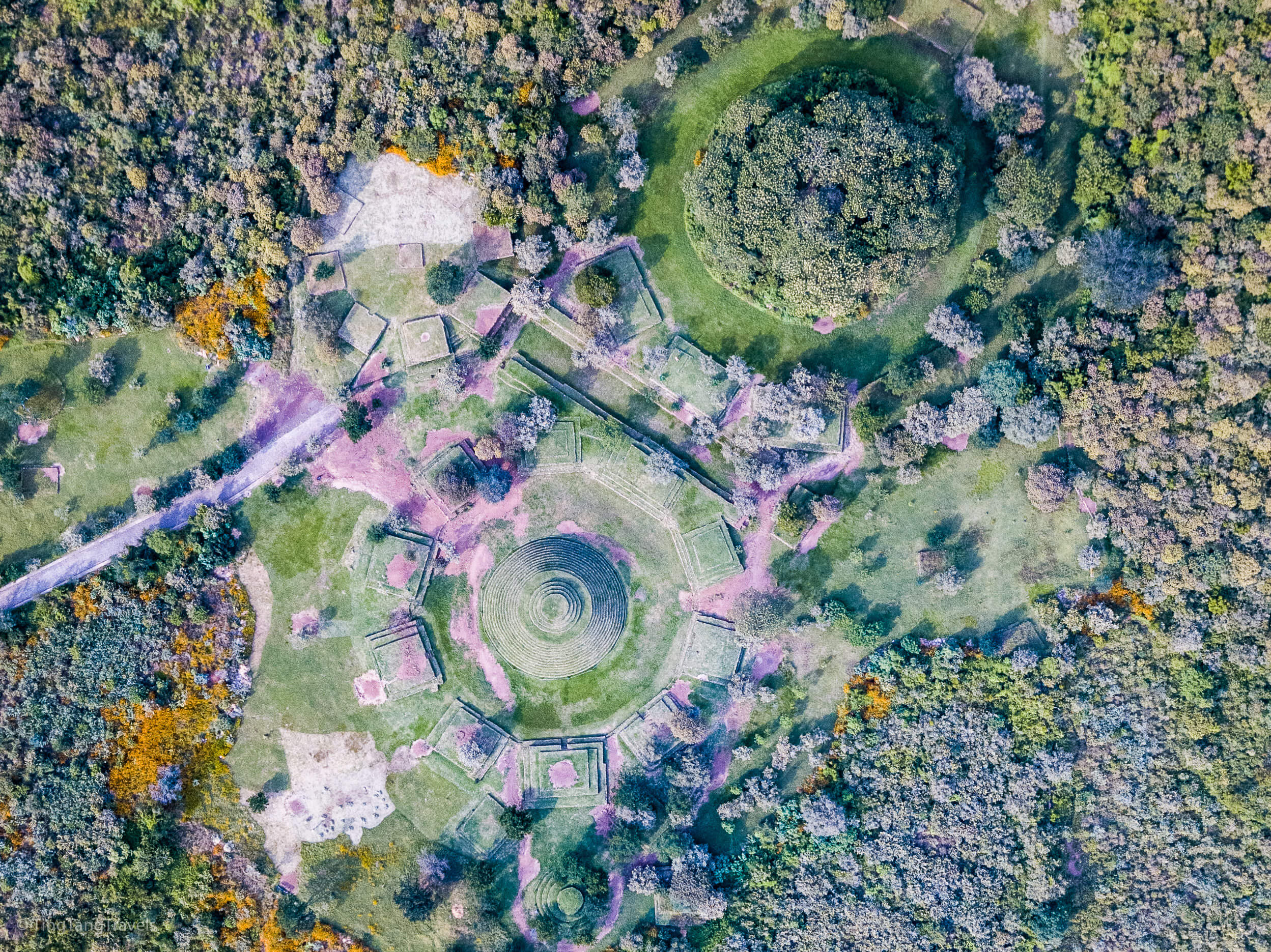 There isn’t too much to see here so you probably won’t be spending too much time, except for waiting for all the people to get out of your photo. We went later in the afternoon, around 4pm and it was just perfect as there weren’t many people. I would say the ideal amount of time to spend here is about 2 hours, no more. 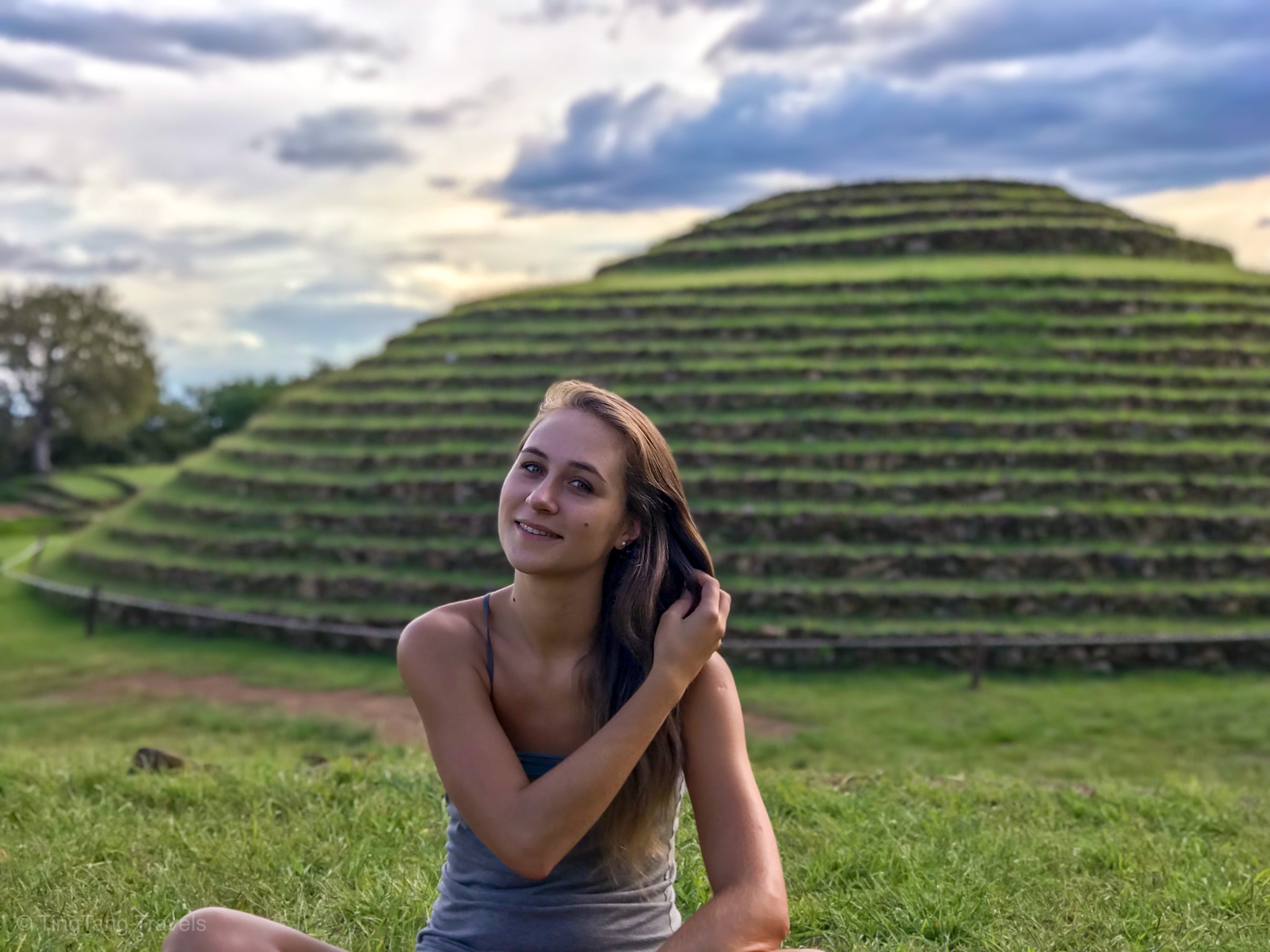 It was a very interesting visit. Never had I known about round pyramids and to visit them was truly impressive. They weren’t based on any kind of pyramids but instead on concentric circles.

The last bus back to Guadalajara is at 8pm back at where it dropped you off. They come about every 20-30 minutes so just make sure not to miss the last one. Most restaurants close around 6-7pm so it’ll be hard finding a place to eat if you’re still out that late.

If you are looking to catch the sunset by the lake (and it is worth it!) there is an Oxxo a block away from the bus stop on the main road.

I’ll be adding a Mexico Travel Guide soon, but in the meantime check out Things to Do in Puerto Vallarta.

Have you been to Guachimontones? Have questions or or want to share recommendations for other places around Guadalajara to visit? Leave a comment below!

This error message is only visible to WordPress admins

Please go to the Instagram Feed settings page to create a feed.